@2021 - All Right Reserved. Designed and Developed by PenciDesign
Top Posts
ArmorThane Offers A Wide Variety Of Polyurea Applications
DO I NEED TO BE RETRAINED GOING FROM...
The Best Tools For Prepping Steel Surfaces
Top 10 Uses For Graco Equipment
Steps for Perfect Polyurea
Reviewing Polyurea For Concrete Floor Protection
Polyurea vs Polyurethane: What’s the Difference?
WHY YOU NEED A BEDLINER
Bedliner Review: ArmorThane Versus Line-X
Polyurea coatings for enhanced blast-mitigation: A Review
Home My Blog The Best Tools For Prepping Steel Surfaces
My Blog 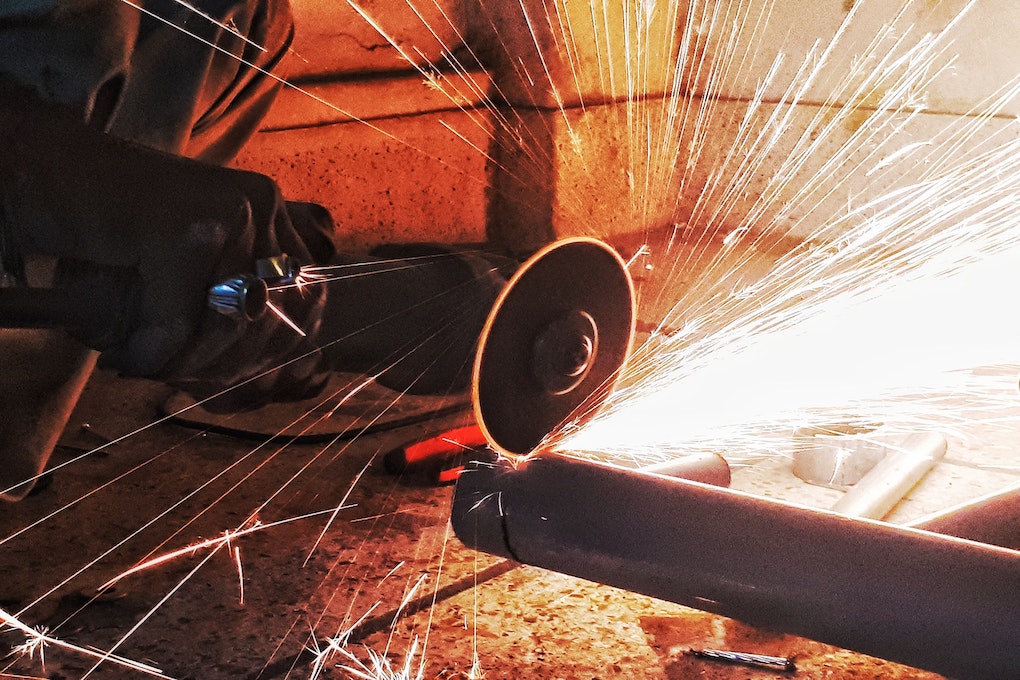 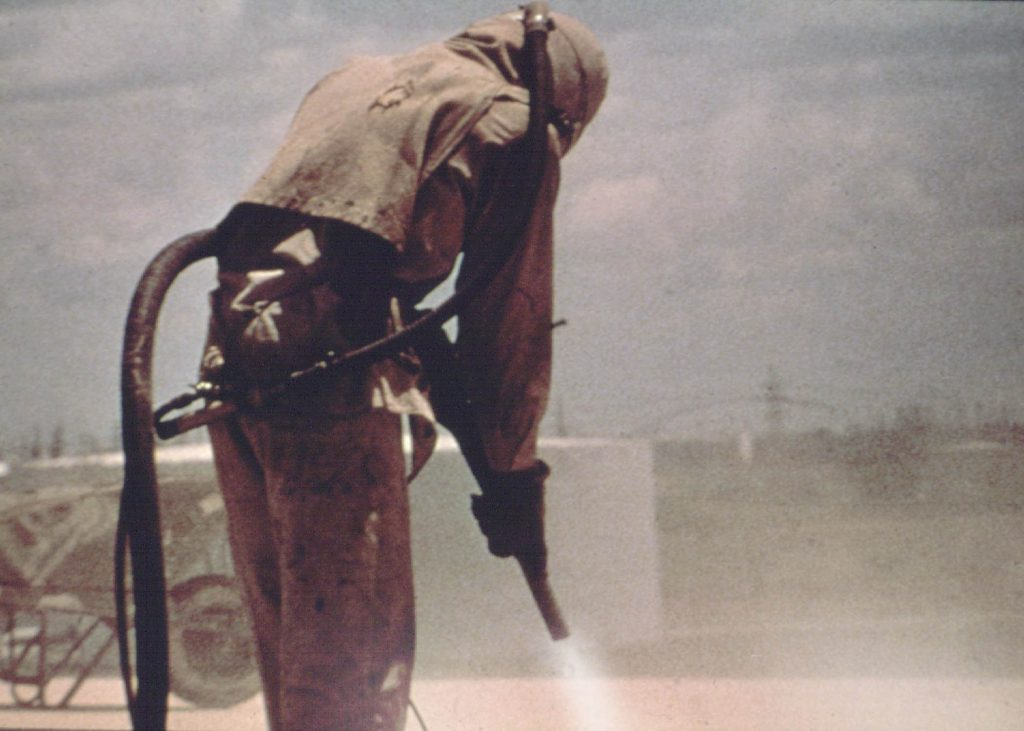 As any coatings contractor will tell you, there’s more to the job than just choosing the right coating. It would help if you also had surface preparation, testing, and application equipment that functions properly no matter the task. 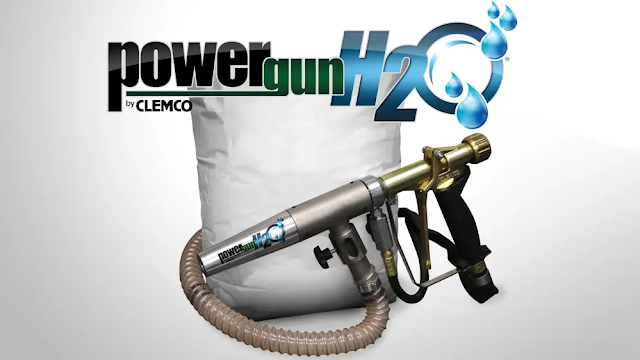 One such product is the Power Gun H20 from Clemco.

This lightweight, compact wet-blast tool is ideal for smallscale and touch-up jobs on elevated worksites, hard-to-reach areas, and aboard ships. Operators can quickly switch between wet and dry blast modes, as well as washdown and air blowoff, and the tool itself gives nearly the power of a small pressure blast system. 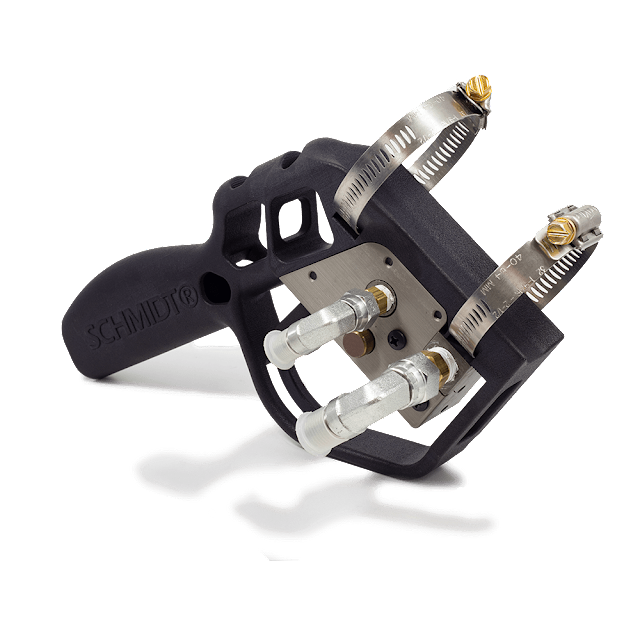 The new Schmidt brand Trigger G2 Deadman from Axxiom Manufacturing Inc. can switch sides on the fittings, making it an ambidextrous tool used by either right or left-handed users. According to the company, the equipment is perfectly suited for blasting applications using smaller nozzles while providing exceptional ease and comfort. Another notable product feature is a modular design that enables users to switch easily between pneumatic and electric modes. There’s also the G2/G2E Deadman, whose design is based on real-world abrasive air blast applications. Another new product from Axxiom is the MiniBRS system, a compact and maneuverable abrasive blaster versatile enough to contain and vacuum contaminants and dust. The new blast/vacuum head features a 40 percent

larger blast pattern, a comfortable trigger-style deadman control, and the ability to blast high-temperature surfaces using an optional adapter/brush. The trigger-style design of the MiniBRS allows operators to use the grip hand to control blasting, leaving the other hand free to be on the blast head and push the G2 safety button. This ergonomic improvement provides a more secure and more comfortable two-hand grip on the blast head. 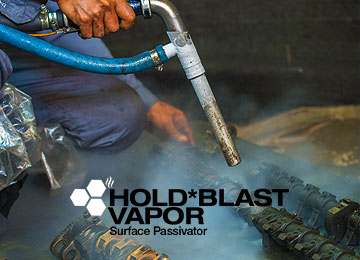 In other surface preparation news, HOLD*BLAST VAPOR, an alkaline-based surface passivator, is now offered by Borchers CHLOR’RID. The passivator chemically changes the active surface of bare metal to a much less reactive state, enabling inspectors to observe the proper application of the surface passivate through an ultraviolet (UV) light/blacklight. This biodegradable product can be safely added to water and does not leave a film or residue that might interfere with coating adhesion.

According to Matt Valentine, senior account manager for the CHLOR’RID business, this last point was a paramount concern for his customers. “One of the biggest questions. Protective Coatings companies have. Does it leave anything on the surface?” he said. “They don’t want it to interfere with adhesion or the performance of their coating systems. So that’s where this product came about. We took our original HOLD’BLAST formula and worked in different products to give it a better visual inspection.”

HoldTight is another company in this area, which offers a water quality test kit along with its 102 product that removes salts and prevents flash rush.

WA Clean Heavy Duty is a patented technology from W Abrasives that measure the cleanliness of a steel surface relative to its surroundings. To illustrate this principle, Ian Bouchard, group marketing and communication director at the parent company, Winoa, ascribed to a checkerboard pattern in which square A may appear cleaner when compared to other, darker squares in its vicinity but may not be clean when compared to a square B located on another part of the board.

This tool “will measure the reflection of the light on a surface and its colorimetric values, and that will return an index. The way we work with it is we teach the tool what the index value means,” explained Bouchard. This helps the inspector at a facility or job site to identify whether it meets a standard for cleanliness as established by ISO, Association for Materials Protection and Performance (AMPP), which is the new name for the merged NACE International and SSPC: The Society for Protective Coatings (SSPC), or any other relevant 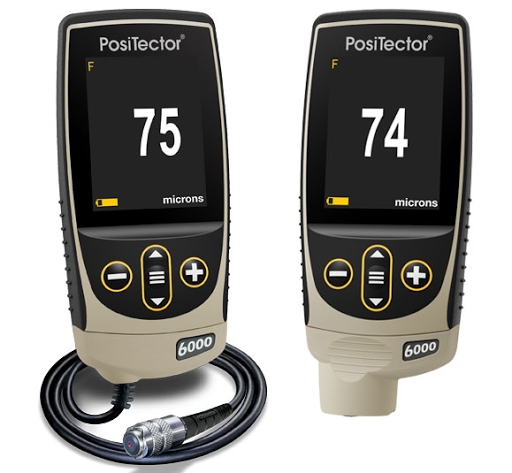 Dew point meters, such as DeFelsko’s PosITector from Gardco. Can measure and record climatic conditions for up to 200 days; many companies are switching to robotic blasting equipment, such as the Sponge-Jet Robotica. to reduce the dangers of confined-space abrasive blast operations.

WA Clean for iOS is a less expensive mobile version of the same technology that doesn’t sacrifice anything in terms of computing power or speed. In fact, “it has more features, newer features, and no limitations,” said Bouchard. He added that the main difference between the two is that the Heavy Duty device is more likely to be used by engineers while the iOS version is geared toward operators.

DeFelsko’s PosiTector DPM L offered direct through the manufacturer and distributed by various companies, including Paul N. Gardner Co. (Gardco), is a dew point meter logger that measures and records climatic conditions, including relative humidity, air temperature, the difference between surface and dew point temperatures, and wet bulb temperature. While attached to a steel structure, the device measures and records environmental parameters independently for up to 200 days, while its internal memory can store up to 10,000 data sets (or 60,000 readings).

Finally, also available from Gardco is a modern, fast method of measuring surface profiles — that peak-to-valley difference of the surface — on blasted surfaces. 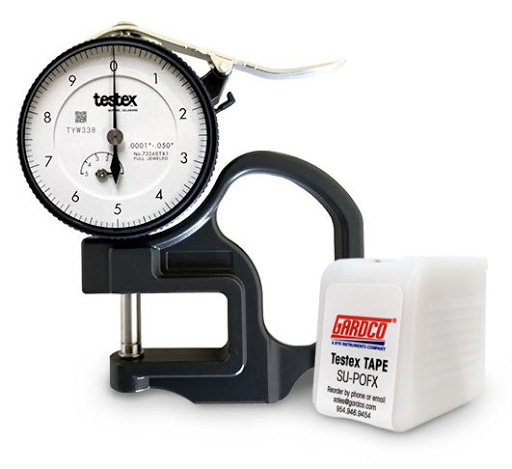 Another testing offering through Gardco Is Press-O-FllmTestex Tape, which measures surface profiles on blast-cleaned steel.

Dial Thickness Gauge with Press-O-Film Testex Tape. When compressed against a roughened material, Press-O-Film accurately replicates details of its surface roughness. In addition, it can be used with a gauge to measure the surface profile of blast-cleaned steel in the roughness range of 20-115 microns (0.8-4.5 mils).

companies always look for ways to stay on top of trends.

“We are seeing many large companies reducing manual,

confined-space abrasive blasting operations in, for example, tanks, pipes, silos, reaction vessels — and as a result, switching to robotic blasting equipment like the Sponge-Jet Robotica,” Merritt said. “We also see higher demand for dust-suppressing abrasives and equipment, to reduce hazardous air pollutants [HAPs|, including heavy metals common to the process. There’s no greater recognition of the dangers of arsenic, beryllium, hexavalent chromium, and lead and how they can create adverse health effects from prolonged exposure. Companies are searching for low-dust abrasives that suppress these HAPs at the source of generation, making the blast process easier to manage and contain.”

DO I NEED TO BE RETRAINED GOING FROM POLYUREA TO SPRAY FOAM SPRAYING?

DO I NEED TO BE RETRAINED GOING FROM...

I generally check this kind of article and I found your article which is related to my interest.Affordable High Quality Garage Floor Epoxy Cambridge Genuinely it is good and instructive information. Thankful to you for sharing an article like this.

At this time, if you can use good medicinal materials and ingredients to strengthen hormones,Diaphragm Pumps USA will be able to retain your youth and enjoy masculine power.

DO I NEED TO BE RETRAINED GOING FROM...

Epoxy vs. Polyurea: A Review